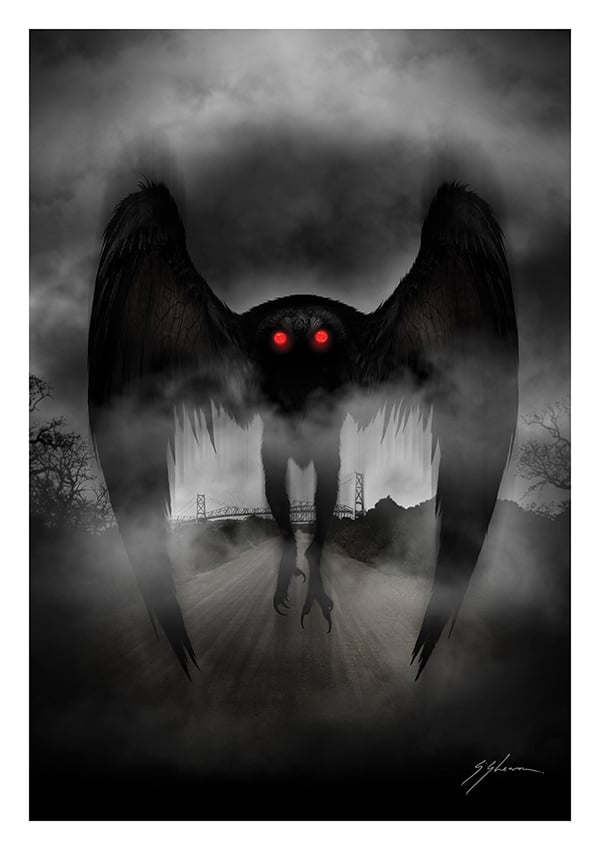 The Mothman of Point Pleasant.

In West Virginia folklore, the Mothman is a creature reportedly seen in the Point Pleasant area from November 15, 1966, to December 15, 1967.

The first newspaper report was published in the Point Pleasant Register dated November 16, 1966, titled "Couples See Man-Sized Bird ... Creature ... Something".
The national press soon picked up the reports and helped spread the story across the United States.

The Mothman was introduced to a wider audience by Gray Barker in 1970 and was later popularized by John Keel in his 1975 book The Mothman Prophecies, claiming that there were supernatural events related to the sightings, and a connection to the collapse of the Silver Bridge.
The book was later adapted into a 2002 film, starring Richard Gere.

An annual festival in Point Pleasant is devoted to the Mothman legend.

The true events regarding the case of 'The Mothman of Point Pleasant' have since been covered in a full length documentary film by 'Small Town Monsters', of which this image was licensed for use as the film's poster.
The movie is available to watch on Amazon prime and can be purchased on DVD via the SmallTownMonsters.com official website.

This print measures 12" x 17" untrimmed, signed in silver and delivered in a reinforced black tube!