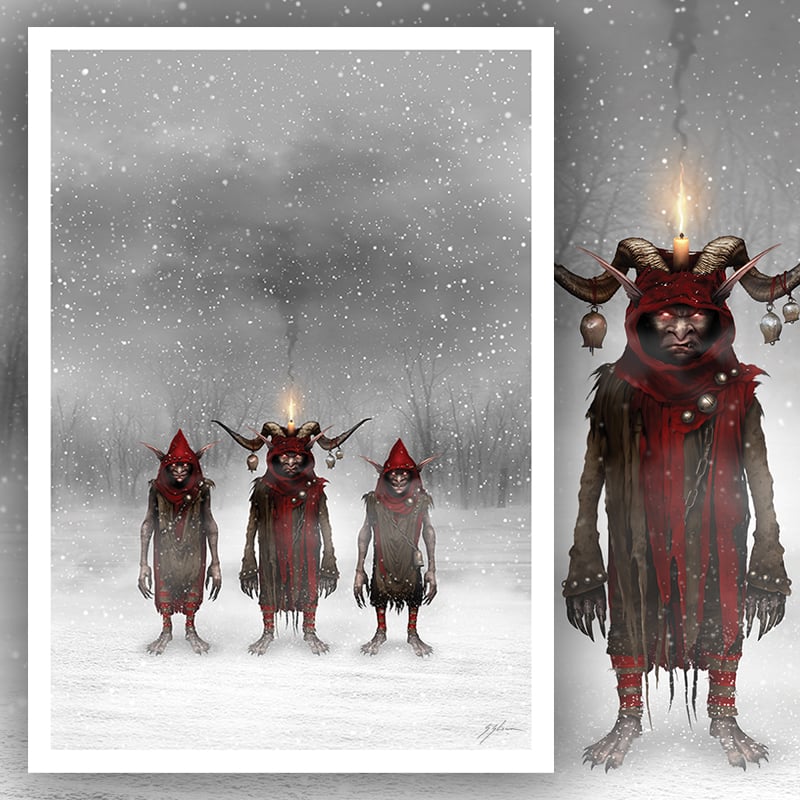 Elves... there are many kinds, many tribes... all have their dark side, but none are quite so dark in nature as the forest elves of winter!

These mischievous beings act as guardians to the creatures of the forest and in particular the trees... Sometimes they'll stow away inside large fur trees and find their way into the homes of the unwary, using the tree like a 'Trojan Horse'. Once they're inside they wreak havoc and play tricks on the unsuspecting 'tree thieves' (a name they give to the humans who cut down and take away fur trees for Christmas decoration).

Their use of what some would call 'fairy magic' or 'glamour' can play awful tricks on the mind and they use this to punish the tree-thieves.
This trickery is often implemented with the use of ground down hallucinogenic mushrooms and various herbs which are then sprinkled into the food and drink of the human household supplies...
The more aggressive and impatient elves might even use a blow-dart or poisoned arrow tipped with such mind altering cocktails. This might be mistaken as simply a prick from a pine needle and often no further thought is given to it... That is until the room is spinning and even then a little bit too much 'seasonal drinking' is often blamed!

Sometimes these 'fae-folk' turn on devices in the middle of the night... or quite the opposite, chew wires or kill batteries. Sometimes they'll break ornaments and bulbs... sometimes they'll misplace important items, such as eye-glasses, keys or the TV remote control - the horror!!!

Sometimes they'll simply steal things altogether, never to be seen again... they know where to hit the emotions the hardest and can actually be quite cruel.
The torment only escalates the longer the 'stolen' tree is in the house!

The Elves will eventually leave when the tree is thrown out. They'll leave the same day... planting plenty of annoying pine needles throughout the house for you to step on for months to come!
Only then will you have paid your debt in torment.

So unless you're looking for a wild season of stressful confusion, tension and chaos in your own home, it's best to get your tree from a designated tree-farm, rather than from the wild forest itself!
...however tempting, leave them be!